Home Federal Reserve 5 Things to Watch at the Fed Meeting 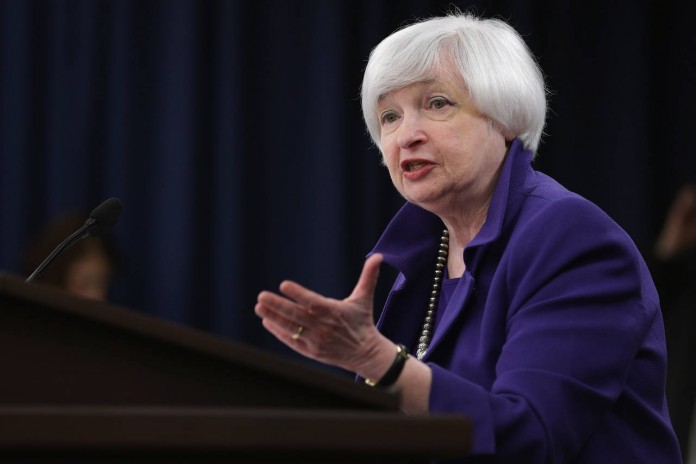 The Federal Reserve this week will update its assessment of the U.S. economy and could take note of recent volatility in global financial markets. But any move or definite signal on interest rates is extremely unlikely. All the action will come in Wednesday’s policy statement, due out at 2 p.m. EST, since Chairwoman Janet Yellen isn’t scheduled to hold a press conference and officials won’t release updated economic projections until March. Here are five things to watch out of the two-day policy meeting that starts Tuesday.

The Fed won’t raise its benchmark federal-funds rate on Wednesday, just six weeks after it raised it for the first time in nearly a decade. It’ll also be loath to abandon the guidance from its last policy statement that it “expects that economic conditions will evolve in a manner that will warrant only gradual increases in the federal funds rate” but that “the actual path of the federal-funds rate will depend on the economic outlook as informed by incoming data.” Don’t count on strong signals either way about a rate increase at the March 15-16 meeting. Officials will likely want to keep their options open as they await fresh data and watch to see if financial markets calm down.

The Fed in December said it judged that risks to the outlook for the economy and labor market were “balanced” when “taking into account domestic and international developments.” It also dropped language that had appeared in the September and October statements about “global economic and financial developments.” Watch to see if officials restore some version of that warning in a nod to renewed financial-market volatility and concerns about overseas growth. If so, note where it appears.  The September statement included a sentence explicitly warning about effects on economic activity and inflation, while the October version—the last before December’s rate increase—was a toned-down reference to risks for the outlook.

The biggest changes to the policy statement will likely come in the first paragraph, which describes current economic conditions. The Fed in December characterized growth as moderate, hailed further improvement in the labor market and said consumer and business spending had been increasing at solid rates, though it also flagged softness in net exports. Since then, data have been mixed. Hiring has remained robust but the broader U.S. economy has appeared to slow. The Commerce Department’s first official estimate of fourth-quarter gross domestic product is due out on Friday. Economists expect it will show an anemic 0.8% growth rate in the final three months of 2015.

The December policy statement said officials would “carefully monitor actual and expected progress” toward the Fed’s 2% annual inflation goal in judging when to raise rates again. Oil prices have dropped since then, and various measures of inflation expectations have shown signs of erosion. Watch the first and second paragraphs of the statement to see if the Fed flags any fresh concern on the inflation front. Last month’s statement noted that market-based inflation compensation measures “remain low” and that some survey-based measures “have edged down.”

The first policy meeting of 2016 means a new slate of regional bank presidents rotating into voting seats on the rate-setting Federal Open Market Committee. One potential dissenter is Kansas City Fed President Esther George, a frequent dissenter during her last stint as a voter in 2013. Ms. George has kept a low profile in recent months, though she recently told the Kansas City Star that the Fed’s December rate increase was “late.” Of course, officials also could repeat December’s unanimous vote.

What Yellen Is Talking About When She Talks About Financial Conditions