Investors in the U.S. have to address one really big question: Will there be a recession soon? If so, sell stocks, sell corporate bonds, buy Treasurys. If not, buy shares, buy corporate bonds (though not necessarily those from energy companies) and sell Treasurys.

Unfortunately, economists have a terrible track record of predicting recessions – and currently are sanguine about the risk of a U.S. recession, pointing to decent jobs growth, wage growth, still solid profit margins and interest rates still near zero.

That’s opened up a big gap between what economists think (everything’s pretty much fine) and what investors think (yikes!).

Markets have traditionally been pretty poor predictors too, as Paul Samuelson, winner of the Nobel Memorial Prize in Economic Science, famously quipped in the 1960s, markets have predicted nine of the last five recessions.

If only they could be that accurate. Antti Ilmanen, a principal at quantitative fund manager AQR, put it in an email: “Nine out of five would be an excellent hit rate we should all strive for, if the prediction was made early enough to be tradeable.”

The regression and correlation calculations used to extract recession warnings may be impenetrable to those without a statistics degree, but the basic principles are remarkably simple. Here are the three leading financial-market indicators:

Other measures look for slide in corporate profitability, which is holding up well so far on an economy-wide basis, if not for the S&P 500, and excessive corporate confidence, most easily measured through M&A booms.

Of these, the most reliable in the U.S. has been an inverted yield curve, which presaged every recession since at least 1976, when Fed data on 2-year bond yields begins. The warning came as far as 21 months ahead in the case of the 2001 recession, or as little as eight months ahead of the recession that started in 2007.

Right now, the 10-year yield of 1.78% is more than a percentage point above the 2-year yield, and slightly above its 40-year average.

This seems like a reason to think that the economists might be right for a change, and maybe there’s no need to worry.

But perhaps things have changed. In Japan the yield curve last gave warning that something was amiss in mid-1989, shortly before the country’s property and equity bubble popped and plunged it into a long recession. In the six recessions since then, Japan’s yield curve has not inverted. 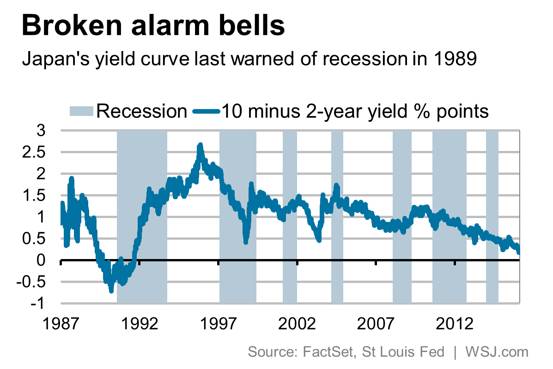 There are at least two obvious possibilities. The first is that in an era when short-dated bonds yield nothing, it is hard for long bonds to yield less (hard, but not impossible – this month Japan’s 10-year briefly offered a negative yield for the first time, although 2-year bonds were even more negative).

On this view the warning signal would be merely a big drop in the yield curve, rather than a move negative – although several of the recessions occurred without even this warning.

In the U.S. there has been a big flattening of the yield curve since last summer, but from very steep levels. The drop looks most like the move from 1993 to 1995 – which was not followed by a recession.

The second explanation is that in the U.S. in the past recessions have arrived after the Fed raised rates to slow the economy. In Japan rates fell from 1991 until 2001, when they stayed on the floor until the 2006 boom.  The Bank of Japan is often accused of failing to help the economy during Japan’s “lost decade” (and a bit more), but it was not rising short-term rates that prompted its recessions, which may be why the yield curve was not a useful signal.

Those who fear the U.S. will be dragged into recession by a failure of the Fed to combat deflation, rather than the usual route of the Fed attacking inflation, should worry about the Japanese comparison.

But the economists who have been looking at core inflation – excluding food and plunging energy prices, U.S. inflation was above 2% in December – or at rising wages are unlikely to buy into the idea that the U.S. is turning Japanese.

Perhaps a recession is further away than those watching tumbling shares and rising corporate bond spreads fear.