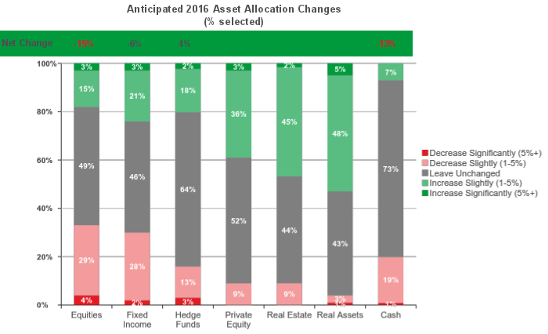 The world’s largest investors are signaling their 2016 approach isn’t one heavy on offense or defense.

The play call, according to a new survey, is to punt towards the future.

The volatile markets have big investors looking to shift more of their assets into illiquid strategies, such as infrastructure, real estate and private credit. The move allows them to focus more on multi-year bets which can inoculate them from feeling the market swings of today.

BlackRock in December interviewed 174 institutional clients in the U.S., Europe, Asia and elsewhere with combined assets of $6.6 trillion.

Nearly one-third of those investors said they planned to decrease their holdings in equities or fixed income, according to the BlackRock study. Nearly half of investors want to boost investments in real assets—infrastructure projects or forestland, for instance—while 38% want to shift more into real estate and 30% would like to grow private-equity bets, according to BlackRock.

Big investors have long signaled desire to diversify their portfolios beyond stocks and bonds. But now, as equity and fixed income markets hit a rough patch, there is “much higher conviction” to invest in non-traditional or illiquid assets, said Mark McCombe, who is BlackRock’s global head of its institutional client business, in an interview.

“You’re taking away day-to-day volatility,” Mr. McCombe said. “Whether it’s real estate, infrastructure or private credit, you’re putting money to long-term use. You’re not having to make money (on those investments) quarter to quarter.”