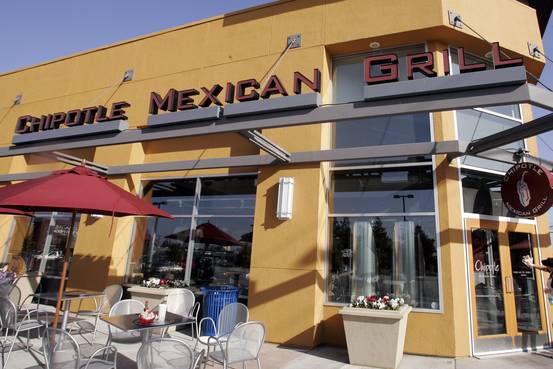 The burrito chain’s stock is having its worst day in two months, down as much as 7.4% Wednesday, after more than half a dozen Wall Street analysts lowered their price targets on Chipotle’s shares following the company’s downbeat guidance Tuesday night. More recently, shares were down 6.3% to $445.61.

The guidance came after Chipotle released a fourth-quarter report that included its first-ever quarterly sales decline since going public. On a conference call with analysts and investors, the fast-casual dining chain’s chief financial officer said that he expects current-quarter earnings per share to be breakeven. That’s well below the $1.16 average per-share estimate among analysts surveyed by Thomson Reuters.

The latest slide in Chipotle’s shares comes on the heels of a 47% decline in the stock from the middle of October to mid-January as a string of foodborne illnesses sickened about 200 Chipotle customers toward the end of 2015.

In the middle of January, Chipotle executives tried to assuage concerns, saying at a conference that the company has “confidence” it can fully recover from the damage caused by the norovirus and two E. coli outbreaks that affected its customers. Shares then rose nearly 18% through Tuesday’s close. But selling has returned as co-chief executive Monty Moran warned Tuesday evening that 2016 will be a “very difficult year.”

Seven Chipotle analysts FactSet tracks trimmed their price targets on shares after the company’s earnings report. Here’s what the brokerage community had to say:

“While we are disappointed to lower our EPS estimates once again, we expect the stock to trade with [same-restaurant sales] trends. On this front, we are heartened as CMG takes bold steps to reignite sales, including spending 6% of sales on marketing/promotions (4x the typical level) in 1Q. We expect a steep recovery in February and March (-16%), and expect the stock to react positively to 3rd party credit card data and mid-quarter updates by CMG.” Jake Bartlett, SunTrust Robinson Humphrey. Rating unchanged at “buy;” price target lowered to $520 from $544; 2016 and 2017 earnings per share estimates cut to $9.56 and $15.30, respectively.

“Despite a planned increase in marketing and promo spend in [the first half of 2016], we expect any recovery to be somewhat slow.” Gregory R Badishkanian, Citigroup Inc. Rating unchanged at “buy;” price target unchanged at $551; 2016 and 2017 earnings per share estimates unchanged at $13.36 and $17.23, respectively.

“While we do expect comp trends to sequentially improve behind a major PR and advertising campaign set to launch next week (and the recent closing of the CDC E. coli investigation), the pace of recovery remains quite uncertain resulting in an unusually wide range of potential EPS outcomes in ‘16/17. On the flip side, we do not believe the company’s long-term brand positioning and/or business model has been permanently impaired and believe it is reasonable to expect it to eventually regain its industry leading sales and margin metrics.” Brian M. Vaccaro, Raymond James. Rating unchanged at “market perform;” price target denoted “not meaningful;” 2016 and 2017 earnings per share estimates cut to $7.60 and $12.75, respectively.

In contrast to the comments above, one analyst altered his tune to an optimistic one after Chipotle’s results.

“Although we acknowledge the meaningful incremental cost pressures and sales deleverage that [Chipotle] will see in 2016 trying to win back lost customers, our work indicates a strong precedent for [Chipotle’s] share price to closely track demonstrated [same-restaurant sales] recovery, even in the backdrop of reduced near-term profitability,” wrote Jeff Farmer of Wells Fargo Securities. He upped his rating on shares to “outperform” from “market perform,” as well as his valuation range to $500 to $530 from $420 to $450.

How to Trade Rising and Falling Wedges