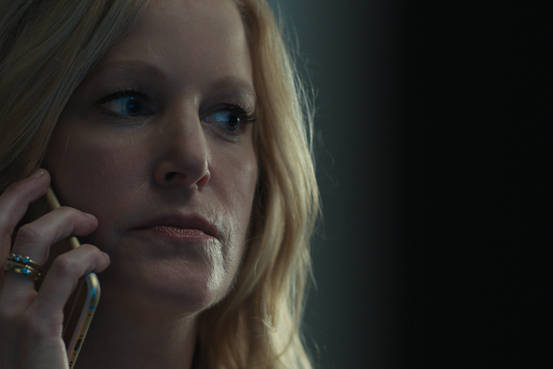 When screenwriter Amy Fox was writing the script for her new Wall Street drama, “Equity,” she needed to find a fake name for a fictional hedge fund.

She began by printing out a list of minerals.

“I discovered that any stone or rock of any kind is already a hedge fund,” said Fox. She concocted the name Titanite. (“Because Titanium is already a fund,” she explained.)

In making “Equity,” which premiered this week at the Sundance Film Festival, Fox and producers Sarah Megan Thomas and Alysia Reiner did a lot of homework. The movie, starring Anna Gunn (“Breaking Bad”) as a finance executive guiding a controversial tech company to an IPO, was built on interviews with women at all levels of finance.

They heard stories of high-powered executives hiding their pregnancies from colleagues, and found it refreshing to meet ambitious women who explained why they stayed in the grueling profession with, “I like money.” The research was rooted in a hope that the movie wouldn’t turn into “Wolf of Wall Street” excess but instead offer a look at the real experiences of finance professionals.

Gunn, in her first feature role since breaking out as Skyler White on “Breaking Bad,” is taking on a rare role in Hollywood: the female Wall Street executive.

The “Equity” idea came to Thomas after hearing the stories and meeting the colleagues of her husband, who works at Lehman Brothers and JPMorgan Chase & Co. Reiner, who admitted she doesn’t emotionally connect to most Wall Street movies, came on board after meeting with a management consultant who shared stories of women dropping out of the financial work force.

The movie was purchased for distribution at the festival by Sony Pictures Classics, and the producers said they’re developing a television series based on the film.

Wall Street’s quirks and practices were laced throughout the making of the film.

The filmmakers brought on consultants who crunched the script’s numbers to make sure the valuations added up. Some potential investors weren’t cleared by their compliance department to partner on the film. And when the filmmakers tried to use audio of real Wall Street traders shouting on the exchange floor, no one currently working was allowed to participate.

“It was really important to all of us that it feel authentic,” said Fox. “People tend to complain that Wall Street doesn’t resemble the real thing [in movies].”

Now, the team says they view Wall Street differently than they did before making the movie. “Equity” concerns a social media company going public — which Reiner sees as an existential quandary.