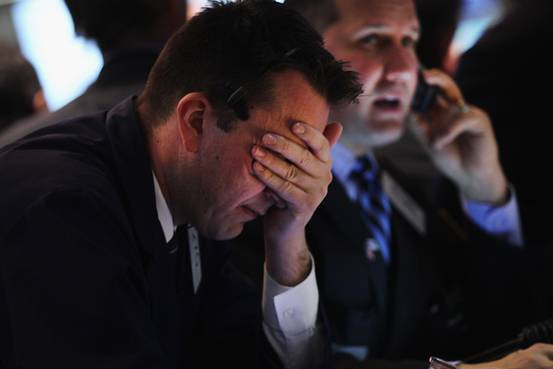 This story first appeared on WSJ City: Fast, fact-packed updates on financial news impacting London. Made for mobile. Download and read for free.

Heavyweight investors and economists have this week postulated that a recent selloff in global stock and bond markets may have been overdone.

But there are still plenty of individuals out there who have yet to see the light at the end of the tunnel.

A report published by the CFA Institute on Wednesday shows that almost a third of investors surveyed think that another full-blown financial crisis is due in the next three years. And only half think that their firms are prepared to manage their portfolios through a crisis.

Retail investors are the most afraid, the survey shows, with 33% forecasting a crisis, compared to 29% of institutional investors.

The survey was conducted in October and November last year—before the most recent bout of market volatility which has crippled sentiment around the globe. The VIX, commonly considered a fear index and broad gauge of global investor sentiment, was at around 15 at the end of October—compared to around 24 today.

Barring a sharp recovery, the first quarter of 2016 would be the worst for returns since September 2011 for both the Stoxx Europe 600 and the S&P 500 indices, according to FactSet data. Assets considered safest during times of stress—like gold and top quality government bonds—have shot up.

A different fund manager survey, conducted by Bank of America Merrill Lynch and published earlier this week,  showed that funds now hold more cash as a percentage of their portfolios than at any time since 2001. Cash is commonly sought during times of market stress. Holding it is a relatively low-risk approach, as cash can be deployed quickly and doesn’t suffer the same sudden losses in value that stocks and many bonds can.

Separately, the CFA survey found that investors’ expectations have shot up with regard to ethical standards, transparency and returns.

“Clients want fees that are structured to align with their interests,” according to a statement accompanying the survey findings, as well as fees that “are well disclosed and fairly reflect the value they are getting from their investment firms.”

“The bar for investment management professionals has never been higher,” said Paul Smith, president and chief executive officer of the CFA Institute.

Further research into what investors want showed that 53% of retail investors and 60% of institutional investors consider ‘underperformance’ to be the biggest factor that would lead them to switch firms, followed by  ‘increases in fees’,‘data/confidentiality breach,’ and ‘lack of communication/responsiveness.’

Once an issue has triggered an investor to re-evaluate their relationship with an investment manager–the survey found–the majority, or 76% of retail investors and 74% of institutional investors, are likely to leave within six months.

Lessons in Loss, From Biotech to Banks

Will Fed Throw in Towel? Bond Traders Not So Certain After...