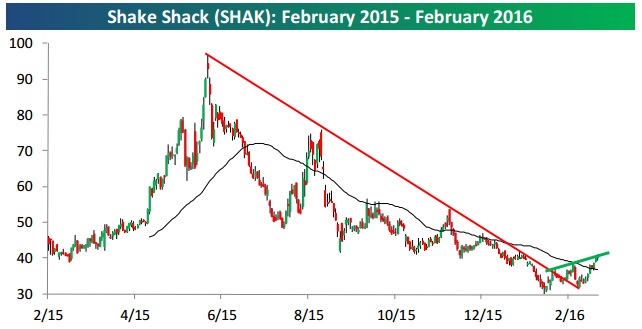 For the technical analysts, shares of Shake Shack Inc. are looking pretty tasty.

Ever since the stock bottomed last month, it’s made higher highs and a higher low — a pattern that’s indicative of an uptrend. And Bespoke Investment Group noted Wednesday that shares of the fast-casual burger chain recently surpassed their 50-day moving average, another good sign for technical analysts who study charts for signs of where shares could be headed next.

It’s a big reversal from last year, when Shake Shack’s stock carved out a well-defined downtrend, consistently setting lower lows and lower highs as shares tumbled 69% from May to January.

Technical traders like to identify uptrends and profit from them until they reverse. Conversely, traders seek to avoid downtrends as they suggest more selling could be in store.

While the tide seems to be shifting on Shake Shack shares, Bespoke said they’re not out of the woods yet.

Shake Shack debuted in 2015 and like many of its newly-public peers last year, the stock eventually stumbled after jumping out of the gate. Still, Shake Shack shares have yet to fall through their IPO price of $21 because they ran up so much in their first few months of trade.

Shake Shack shares hit an intraday bottom the same day the company unveiled its first-ever chicken sandwich, the Chick’n Shack, on Jan. 14. But since then the stock is up 36% despite very little news, other than an analyst upgrade on shares shortly after the chicken sandwich debut.

When Sharon Zackfia of William Blair upgraded her rating on Shake Shack shares last month to “outperform” from “market perform,” she become the only Shake Shack bull among analysts surveyed by FactSet.

The company releases quarterly earnings on March 7 and is expected to report seven cents in earnings per share on sales of $50.4 million, according to Thomson Reuters.