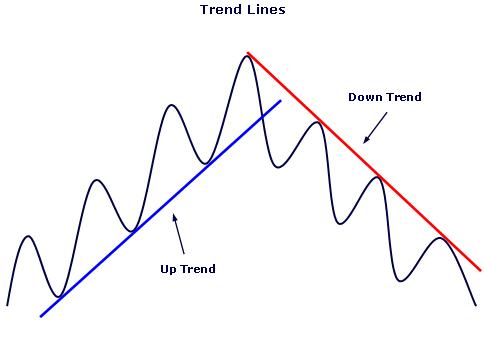 The significance of a trend line

Trend lines are a part of many techniques and strategies designed to show how price has trended in the past to predict movements in the future.  Commonly, trend lines are used as support and resistance, indicating where investors favor buying or selling.  Trend lines can also be used as a part of a comprehensive trading plan to show the general direction of the market, without any interest paid to support and resistance.

The many different kinds of trend lines

Trend lines can be horizontal or vertical and anywhere in between.  Generally, a trend line is drawn with a slope to mark even the most modest uptrends or downtrends in the market.  Horizontal trend lines are also very popular for showing support and resistance lines at a common price point.  It is fairly common that a stock will trade wildly around a common price point and do it even over the course of time.  “Round” numbers such as $25 or $50 are more likely to be a place for a horizontal support or resistance because traders like to use round numbers as entry and exit points.

A trend line is worth its weight in gold

Professional traders, specifically day traders and swing traders, have success using trend lines because trend lines are a better indicator over the short run than the long run.  For long-term investors, trend lines usually fall out of favor because they provide very little trades over the long term and are not as accurate over long periods as they are short term.  The volume that can be found in short term trading mostly focuses around the small support and resistance points, thus making trend lines very important to day and swing traders.

Arguing against a trend line

There has been much debate between academia and traders regarding the worthiness of trend lines in market data.  The academic theoretical position stipulates that a theoretical market is so perfect in nature that trending would not occur.  The viewpoint of the trader focuses on the inner workings of the minds of hundreds of thousands of other traders, who all find certain price points more interesting and lucrative than others.  The argument against trend lines is that they are self-fulfilling prophecies and do not work out to real world gains.  However, the fact is that trend lines are used simply as guidance for future price movement based on how day traders value today’s positions, and many traders use technical analysis profitably.