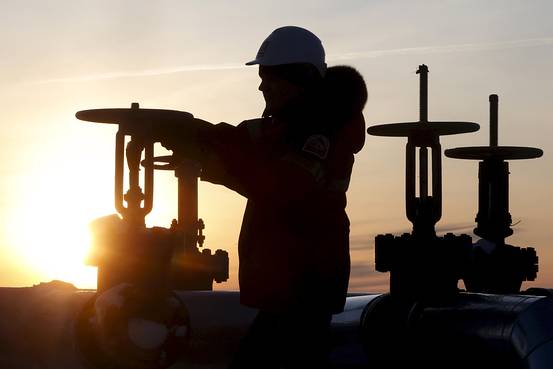 The oil market may look crazy, but, really just take a deep breath, keep calm and carry on.

It was just three days ago the International Energy Agency said oversupply is getting worse, not better. And U.S. government analysts agreed, saying the glut would keep prices below $40 a barrel through August.

It was just two days ago that the Organization of the Petroleum Exporting Countries cut its forecasts for global oil-demand growth.  And then reported its biggest producers increased production last month anyway.

And it was just a day ago than an Iranian official said the country plans to cut prices for its Europe-bound oil by 10 to 20 cents a barrel in March. The country is still trying to increase output by 500,000 barrels a day now that some of its economic sanctions are lifted, a big reason oil has been hitting its lowest points in more than a decade this year.

“It’s difficult to point to anything fundamental that would warrant a 10% move in a day,” said Michael Tran, commodity strategist at RBC Capital Markets.

Traders of all stripes are frightened by uncertainty about the direction of the global economy. And while that largely adds to the pressure to sell everything with any risk-factor – like oil – it can also spring-load a market for a quick rebound as jumpy traders watch for any headline with the chance to move a market.

That is especially true in oil right now because of how hard sellers have come on. Money managers have nearly doubled their amount of bearish bets on oil from a year ago and increased them by nearly a third just since the start of 2016.

Many traders are likely getting out of positions today to protect themselves from major changes happening while they’re gone for a three-day weekend. And that means those oil sellers are closing out trades by temporarily becoming buyers, bidding up prices. They are especially likely to do that if a headline scares them into believing prices might rise.

That is exactly what happened late yesterday when The Wall Street Journal posted translated comments from the United Arab Emirates’ energy minister. He said “everyone (in OPEC) is ready to cooperate” to cut output, but only if it got “total cooperation from everyone” outside of the cartel. Many traders bought on the first part of the comments, ignoring the second.

Any belief these comments foreshadow an output cut amounts to very optimistic speculation, brokers and analysts said. Few believe such international cooperation will come through. Russia promised cuts in the early 2000s that it never made, scaring OPEC leaders from making a similar agreement now. And Iran’s reentry into the market – creating heavy competition on its own between Iran and other OPEC members – makes any collaboration even less likely in the near-term.

“It simply would not be prudent to talk about a production cut before the market knows what Iran has up its sleeve,” Mr. Tran says. “There’s going to be a lot of market noise over the next few months, but we don’t really see anything changing in the near-term.”

The Fed, the Markets, and the Great Guessing Game

How Banks Would Fare if U.S. Interest Rates Turned Negative

A Few Worrying Numbers From the Bond Market