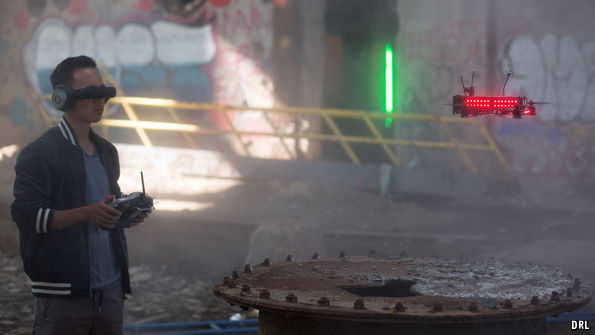 SOME sports, such as wrestling and sprinting, claim long histories. They were portrayed in cave paintings thousands of years ago. Others are just lifting off. The racing of drones is, thus far, a niche activity, but several firms are betting on it. “Every person under the age of 13 either has a drone or wants one,” says Nick Horbaczewski of the Drone Racing League (DRL), a startup. “We are going to raise a generation of pilots.” The DRL has raised $8m from investors, including Stephen Ross, the owner of the Miami Dolphins, an American-football team, and CAA, a big agency that represents film and sports stars.

Drone-racing began as an amateur sport in Australia only a couple of years ago, and spread with the aid of social media, as pilots shared videos of their contests. Racers navigate at speeds of up to 100mph (160kph) through a course of illuminated checkpoints, getting a drone’s-eye view of their aircraft’s position through video goggles.

The sport has had to work out some technological kinks, such as eliminating the “latency” that delays the live video feed to the pilot, which could cause a drone to miss a turn and…Continue reading

Are Markets Really Predicting a Recession?